FORTY YEARS OF EXCELLENCE, The name Subash Modi is revered within the cricketing community of Eastern Africa and across the globe, Subash is a man who has been a stalwart in the Art of umpiring for forty years and is one of the longest-serving umpires in world cricket.

Born on March 30th 1946 on the island of Zanzibar, Subash’s love for the game of cricket started at an early age in 1959 the Modi family moved to neighbouring Kenya for greener pastures, and in 1969 his hard work paid off as he represented the Kenya National team, but subash’s real passion lied elsewhere and that was umpiring, an art that he has been executing with excellence for the past forty years.

Mr Modi’s dedication, discipline and hard work are legendary despite working full time with Ogilvy and Mather East Africa for 35 years as a senior member of the staff and where he was awarded with the Ogilvy Eagle, before retiring, but because of experience he was called back to work for Ogilvy for a further five years as a senior consultant and being a family man with three children, Mr Modi balanced all aspects of his life superbly and doing his given duties with excellence.

The Cricketing gene of Subash Modi was inherited by one of his son’s Hitesh who was part of the golden generation of Kenya cricket, Hitesh would later end up making history with his father. On a sunny morning in August 2006, both modis took the field for an Odi International against Bangladesh, as Fate would have it when Hitesh was on strike, subash was the umpire, a good length delivery from Mashrafe Mortaza hit Hitesh on the pads, a shout for LBW by Mashrafe was heard and instantly the finger went up, this was the first time in international cricket that a father had given his son out LBW in an international match, this moment sent both modis in cricket folklore.

Subash Modi has seen the highs and lows of cricket in his time at the centre, recently subash was hit on the knee with a cricket ball, an injury so severe that it required surgery, most people would have called it quits after an injury like that, but not Subash Modi, he recovered and came back stronger than ever to resume his duties.

In Forty years of Umpiring Subash Modi has had the privilege of umpiring around the world and was a member of the ICC panel of umpires until 2010, in his years of representing Kenya as an umpire Modi has had the honour of meeting the King of Malaysia, during the 1998 commonwealth games, and in 1999 Modi was in the presence of the Queen of England at the Buckingham Palace during the 1999 cricket world cup.

on his 40th anniversary Subash Modi received several messages of appreciation from across the world.

below are some of those messages,

Congratulations on your forty years of service to the KCU&SA in various capacities and particularly to the wonderful game of cricket. I pray for you to do a half a century. Just 10 more to go.” 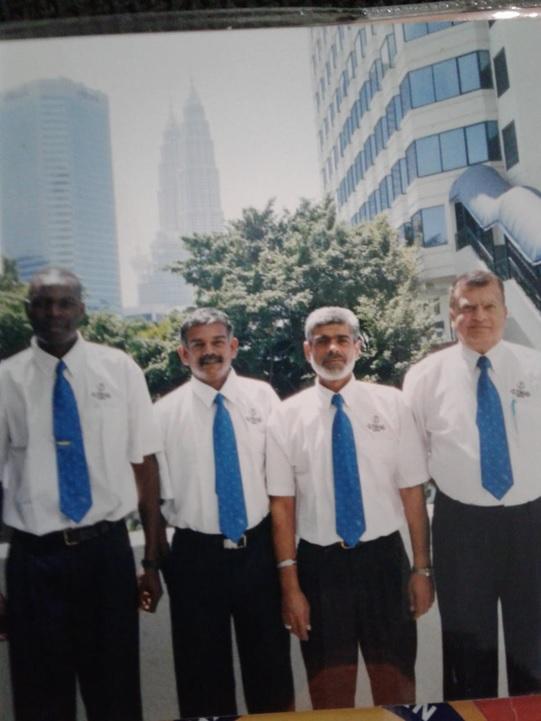 We wish him all the best in his endeavors in life

A great man of knowledge of the game always helpful and assisted others to excel them to greater heights.”

This is just but a blessing from above. To get that time, strength and will to succeed is not a joke Sir.

I take this opportunity to congratulate you on attaining 40 years umpiring and giving your whole for the noble game of Cricket.

God Bless you and keep  you fit and strong for the the new season.”

One thing worth noting is that Subash Modi, has not only been an umpire but he has helped nurture lots of umpires too, and has been a pivotal in helping develop the game, Modi has umpired 22 ODIs and nine T20 matches. Subhash is also a former Kenya National Cricket Selector. He has organized many cricket tours overseas, conducted umpires seminars and training to improve the standard of the umpires. Subhash Modi is still active in Umpiring and Match Refereeing in Kenya. from the team, at cricktalk20 we salute this fine gentleman who has tirelessly served the game of cricket with excellence for forty years.